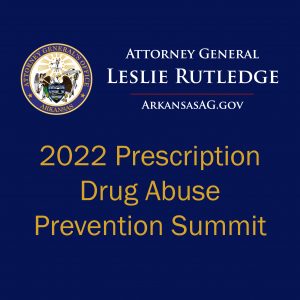 There will be 5 breakout tracks: Clinical, Criminal Justice, Family, Counseling/Recovery and Education/Prevention.

This event is hosted by Attorney General Leslie Rutledge, The Office of the Drug Director, Criminal Justice Institute and Arkansas State Board of Pharmacy.

Space is limited for this FREE training and will fill up quickly.

Bertha K. Madras, PhD
Bertha K. Madras, PhD, is a professor of psychobiology at Harvard Medical School, based at McLean Hospital and cross appointed at the Massachusetts General Hospital. Her research focuses on neurobiology, imaging, and medications development (19 U.S. and 27 international patents) for neuropsychiatric disorders. In public policy, she was deputy director for demand reduction in the White House Office of National Drug Control Policy, a presidential appointment confirmed unanimously by the U.S. Senate. Dr. Madras recently served as a panelist at the Vatican Pontifical Academy of Sciences and in 2017, was appointed as one of six members of the President’s Commission on Combating Drug Addiction and the Opioid Crisis. In service to the public, she developed a museum exhibit and a CD (licensed by Disney) with the Museum of Science, Boston. She is recipient of an NIH MERIT award, a NIDA Public Service Award, and others.

Fred Muench
Fred Muench is a clinical psychologist and the President of The Partnership to End Addiction, which is a merger of the National Center on Addiction and Substance Abuse and the Partnership for Drugfree Kids where he was the President and CEO. With his team, his focus is on building, testing, and implementing digital media interventions to prevent problem substance use and treat addiction and mental health concerns in individuals and families real-world and clinical settings. This includes the comprehensive direct to parent and caregiver digital services offered by the Partnership including its national helpline, mobile support applications, online support groups, peer support services, and self-guided e-learning. In addition, he works with the team on building large scale media campaigns to empower families and loved ones to be an integral part of the behavior change process. Fred is an advocate for marginalized families to help change the stigma around substance use so more people will seek support for their loved ones and themselves.

Attorney General Leslie Rutledge
Leslie Carol Rutledge was sworn into office in 2015 as the 56th Attorney General of Arkansas, becoming the first woman and first Republican in the State’s history to be elected to the office. Arkansans’s resoundingly re-elected her to a second term in 2018. Rutledge has dedicated her entire career to public service and the law, where she served Arkansans as a former prosecutor and in private practice with a focus on administrative and election law. A seventh-generation Arkansan, Rutledge grew up on a cattle farm and attended school at the Southside School District in Independence County. She learned the importance of hard work and public service from her mother, an elementary school teacher, and her father, a lawyer and a judge. She graduated from the University of Arkansas and the University of Arkansas at Little Rock William H. Bowen School of Law. Rutledge is admitted to practice law in Arkansas, Washington D.C., and before the U.S. Supreme Court. Attorney General Rutledge and her husband, Boyce, are the proud parents of their daughter Julianna.

Mark Westfall
Mark Westfall is a child, adolescent, and adult psychiatrist currently residing in Birmingham, AL. He has spent thirty years learning from one patient at a time in a wide variety of clinical settings and patient populations. He is now in an educational stage of his career and is the creator of “Let’s Think On It”, a podcast series and educational platform for teaching human behavior in present society. A native of Dalton, GA, Dr. Westfall earned his bachelor’s degree from Rhodes College, his medical degree from UAB and completed his psychiatric residency followed by a child/adolescent fellowship at the Medical University of South Carolina in Charleston. At the end of his training, he was one of 20 national recipients of the APA/Mead Johnson Fellowship Award in community psychiatry. His prior positions include Medical Director of the Community Mental Health Center in Charleston, President of Frank Kay Psychiatric Clinic in Birmingham, President/owner of Westfall Psychiatric Services, and radio talk show co-host for “Oh Brother Radio” and “Doc Talk”.