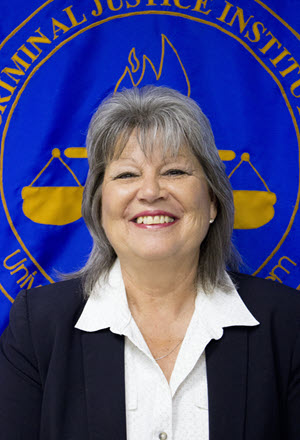 Dr. Cheryl P. May is the Director of the Criminal Justice Institute (CJI), its National Center for Rural Law Enforcement (NCRLE) and Arkansas Center for School Safety. She was appointed Director on July 1, 2010. She has served and been an advocate for the Arkansas law enforcement community for more than 39 years as a forensic professional and as CJI Chief Executive Officer, CJI Deputy Director, CJI Assistant Director, and CJI Program Manager.

Since 2014, Dr. May has served as Chair of the Division of Elementary and Secondary Education’s Safe Schools Committee. In 2018, Dr. May was appointed as Chair of Governor Asa Hutchinson’s Arkansas School Safety Commission. Since 2018, she has been Chair of the National Cybersecurity Preparedness Consortium. Dr. May has served as a member of the Board of Directors for the National Alliance for Drug Endangered Children (National DEC) and Chair of the First Responder Subcommittee of the Arkansas Legislative Task Force on Autism. She was also appointed a member of the Arkansas Task Force for the Prevention of Human Trafficking. Dr. May played a lead role in Arkansas becoming the first state in the U.S. to develop and implement certified Child Abduction Response Teams statewide.

Dr. May is Principal Investigator on numerous CJI grants (SAMHSA, Arkansas Department of Adult Aging and Behavioral Health Services, and Blue and You Foundation for a Healthier Arkansas) which focus on reducing the number of opioid overdose deaths in Arkansas. She is also Principal Investigator on all CJI/Cybersecurity Defense Initiative DHS, Federal Emergency Management Agency grants that focus on providing cybersecurity training to IT professionals that work in critical infrastructure.

Dr. May played the lead role in the development of CJI’s three unique academic programs that allow active members of Arkansas law enforcement to earn certificates and associate degrees in crime scene investigation and law enforcement administration and coordinated efforts to establish partnerships with 22 Arkansas institutions of higher education to make these programs accessible across the state.

Dr. May earned a Ph.D. in Biological/Forensic Anthropology at the University of Tennessee, Knoxville in 1984. She also earned a M.A. in Biological Anthropology from Western Michigan University in 1982 and a B.A. in Anthropology from West Virginia University in 1978. Since her arrival in Arkansas, she has assisted Arkansas law enforcement in the investigation of hundreds of cases, either through laboratory analysis and evaluation of skeletal remains or in the identification and field recovery of suspected human remains. Immediately prior to joining the CJI staff in 1995, she was the Director of Clinical Research for the Department of Orthopedics at the University of Arkansas for Medical Sciences.